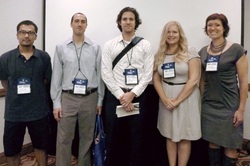 Parrenas’ fascinating ethnography is a riveting, insightful and compelling account of an important new segment of women workers in the global economy: migrant female "entertainers" bound for work in the global sex industry. Based on participant observation in various Tokyo nightclubs and in-depth interviews with the Filipina migrant hostesses who work in them, Parrenas provides a searing examination of the moral worlds of sexualized labor. She challenges the prevailing assumption that all migrant hostesses in Japan are trafficked and engaged in prostitution, and instead, shows that they are caught up in complicated forms of "indentured mobility." She carefully examines how a variety of factors, from migrant debt bondage to the organization of work both inside and outside clubs, create relations of exploitation and coercion between migrant hostesses, labor brokers, club owners, and clients. She also shows how Filipina migrant hostesses rework notions of femininity and masculinity to enhance their income and earnings, as well as control the dynamics of sexualized labor. Parrenas’ remarkable ethnography and theorizing then allow her to weigh in on key global policy issues – what constitutes “trafficking” and who gets to define it.  Parrenas’ willingness to make bold arguments is sure to garner ire and rebuke, but it also deepens our understanding of the contradictions and complexities of sex work, a field that is absolutely central to the new face of work in the 21st century.

Erin Hatton, for her book, The Temp Economy: From Kelly Girls to Permatemps in Postwar America. Temple University Press, 2011.

This book makes a critical intervention in the study of flexible work and temporary employment. By systematically analyzing how the temp industry actively promoted the idea of "temp workers" against existing cultural understandings of work and employer-employee relations, Hatton challenges the conventional wisdom that the rise of temp work was both inevitable and natural. Tracing the development of the industry since the 1950s, Hatton shows how temp firms such as Kelly Girl utilized gendered meanings about the difference between men's and women's work to convince other firms, as well as women workers themselves, of the "value" of temp workers. Once established, temp firms then sought to "erase" these gendered meanings by promoting temp work a solution to stagnating economic profits and striking workers. The view that workers were a "liability" as opposed to an "asset" for firms profoundly shifted cultural understandings about what work and workers were, laying the basis for the phenomenal growth of the practice of hiring temp workers. This growth, however, was a contested one, and Hatton ends the book by highlighting cases of workers, community organizations and labor unions trying to "box in" the use of temp workers as an employment norm. The book is written in clear and accessible prose, and will no doubt become standard reading among scholars and students in the sociology of work and labor.

Tamara Kay for NAFTA and the Politics of Labor Transnationalism. Cambridge University Press, 2011.

The book provides a fresh and provocative argument about globalization and labor movements.  Kay provides a definitive account of the effects of NAFTA on labor transnationalism.  Her careful research shows how NAFTA actually aided labor transnationalism rather than weaken it.  Kay draws on intense field research in Mexico, USA and Canada to support her argument and provide convincing explanations for the variation in union strategies as well as pushing forward theories of labor as a global social movement.  The book also lays out the real possibilities of transnational labor solidarity in a global economy.

Heather Thompson, "Rethinking Working-Class Struggle through the Lens of the Carceral State: Toward a Labor History of Inmates and Guards," Labor: Working Class Studies of the Americas 8(3): 15-45, Fall 2011.

Thompson's article tells the story of prison labor in the United States in the 20th century and places it in a broader context of working class struggle, bringing a new and unique perspective to studies of labor and working class history. The article traces the changing patterns of institutional regulation of prison labor and its renewed commodification in recent decades. More importantly, it offers a close examination of the self-organization of the prison work force, the collective action of both prisoners and prison guards, respectively, and their struggles against exploitation. The author draws on a wide range of historical documents including newspaper stories, government hearings, legislation and court decisions, union archives, and other published and unpublished sources, and offers a rich, dramatic account filled with compelling detail. Altogether, the article provides an original, stunningly eye-opening look at an understudied working class population, and it makes a persuasive case for the importance of this "hidden" history for our understanding of American labor and labor movements.

Shinji Kojima, “Why Do Temp Workers Work as Hard as They Do?”

Kojima’s paper applies Michael Burowoy’s classic question “why do workers work as hard as they do?” not to the full-time, “core” workers that Burowoy examined, but to contingent workers in Japan’s auto parts industry.    Kojima’s response to this question is novel, theoretically sophisticated, and richly ethnographic.   He shows that neither of the conventional answers to his question – he calls them “consent” and “coercion” for short – accurately captures what a number of the contingent workers he comes to know tell him.  They say that they find intrinsic value in the work they do, thinking about overcoming its physical and mental challenges much as athletes do.  Kojima draws on Marx, Bourdieu and Wacquant to help him make theoretical sense of what he sees and hears.   He makes no claims about the generalizability of the psycho-social dynamics that he documents, but gives us valuable new conceptual tools with which to explore Burowoy’s question in other sectors and countries.

Kyle Arnone’s paper uses a union organizing drive among deregulated port truckers in the Los Angeles-Long Beach area to explore the factors that determine the impact of union organizing efforts on worker solidarity.  Arnone shows that, contrary to common assumptions, high levels of worker solidarity developed among these truckers, precisely because of the (unintended) impacts of trucking deregulation.  Moreover, again contrary to what many analysts would expect, the union’s organizing efforts fragmented and eroded this worker solidarity.  Out of these “negative” findings, Arnone develops a theory of how union organizing strategies interact with different levels and configurations of worker solidarity to yield very different outcomes in terms of workers’ capacity for collective action.   This theory helps us to understand the conditions under which the centralized, staff-led organizing model developed by unions like the SEIU builds worker and union power, and when it undermines them.  In other words, it is useful to the labor movement as well as interesting to sociologists.

Marcel Paret, “Precarious Politics: Struggles for Redistribution and Recognition in the US and South Africa”

Michel Paret’s paper also focuses on contingent labor, which he calls “the precarious class.”   While Kojima focuses on the motivations of individual members of this class, Paret asks about the politics of the group: who do they struggle for and against, what do they struggle for, and how do the answers to those questions differ from those given by the element of the working class embedded in the formal sector?  Paret explores two types of political struggle -- those that focus on the distribution of material resources, and those that focus on group recognition – in two locations: Los Angeles and Gauteng, South Africa.   He argues that cross-case differences in levels of unemployment, and in the citizenship status of the precarious class, result in political dynamics that are the inverse image of each other.  By helping us to see these patterns clearly, and offering a simple but powerful account of what factors account for them, Paret’s paper is a valuable contribution to our understanding of precarious class politics.

Back to the awards main page.